I have more sample mock music tracks for you all, along with a nice plethora of concept and layout pages. Take a gander if you're interested, for I present more on the ever growing project. There is a full game breakdown at the bottom, since we are still accepting help from any qualified programmers, animators, and Pixel artists: 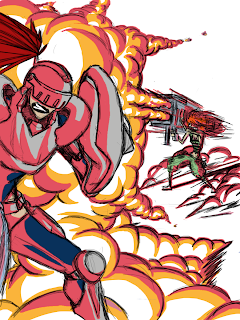 (There are Several stages still in the woodworks [i.e. The Loco Locomotive stage, and the Eternal Symphonia-Forever Suite] and none of these tracks are final. I have a couple people working on auxilary instrumentals, and these are just to convey the same feeling of the in-game music. There is also a Theme Song in the process of being made, but details on that will follow later on in the future.)

LANCE GIRL is an entirely independent project I'm launching. I myself love pixel/sprite games, and had a stint of serious spriting years ago. Therefore, the game itself is a flat plane side-scroller. The player controls a mysterious crusader in armor known as the "Lance Girl", hell-bent on protecting the land of SONATA from the evils of the current overlord, ArchMaster Grave. Lance Girl is equipped with a custom forearm-weilded lance Romeo, A radiant armor known as The Valiant, and a mystical 1-handed shield called "The Brave", which has 8 engravings in it.The game will consist of 9 levels, in a somewhat non-linear fashion, and then a final level split into 4 parts. There are 9 bosses and a final boss, and the levels are flooded with an array of purple menaces called The Drain. The player will progress through the levels, cutting through hordes of Drain, to reach the end of the stage. At the end of each stage there will be either one of 8 Bravestones (that can be equipped to your shield to change it's abilities) that will allow you to gain access to new armor, and eventually the final gateway, leading to Grave's Castle. Some bosses will be guardians of the temple or area, while others will be actual subordinates of Grave (i.e. BULLET CHICK, a multi-gun toting sociopath, or Arsenal Dude, who's a walking Armory of Beserker an Viking weaponry.)The game's music, script, and short cinematics are being handled out-of-house (I have several people helping me with this, as well as doing some composing and mixing myself), and the characters are in the process of being copyrighted.----------------------------------WHAT I HAVE: Concepts, Bios, Story, Characters, Game mechanics, and basically everything else conceptual or pertaining to how the game will play or progress. I have a full vision of what this game should be upon completion, and what it needs in it to reach this level.WHAT I'D LIKE: A solid team of artists and designers that can bring my vision to life. Previous experience is definitely asked for, since I would like this to be a flawless creation process. The time frame in which I would like this released to the world is not set, but I would like to have made serious, plausible headway by this time next year, and have the game on the market by 2014 at the latest.WHAT IS NEEDED:-A pixel artist, capable of turning my designs into an appealing sprites and level backgrounds, while retaining my style.-A game designer (with solid experience in gaming software), The project was originally intended to be a simple flash game, but as the project grew I realized a game this large would be nice to get onto PSN and XBLA, perhaps even Virtual Console. I'd need someone familiar with all the software and such required.-A programmer. I know little to nothing about the subject in detail outside of programming minor text events and menial flash script.This game is not meant to be too technologically or graphically intensive, but will need some serious work to deliver well. I want a very professional, appealing look to it.The game concept, story, characters, and mechanics are all completely finished and finalized, and upon forming a team, I will go into far greater detail on what this project truly is, as well as show you mock-up sprites, write-ups, and concept sheets to help you gain a feel for the general aesthetic. I assure you, you will be credited for your work, and also reap any amount of profits this game may someday produce. Your work will also be compensated, but only upon completion of a respectable and wanted product. I am willing to negotiate payments to a degree.
Feel free to help me deliver a solid game here. If you have any questions, you can PM me on PixelxCore's PixelxWorld Community (GreenDragonXIII), reach me through IM (MSN:greendragonxiii@hotmail.com/AIM:JetSetRamazuki13), or leave a message on my youtube page (GreenDragonXIII: MELON ZONE XIII), facebook (Cheshire Meløn: www.facebook.com/jetsetmelondrop), and twitter (SødaJunky). 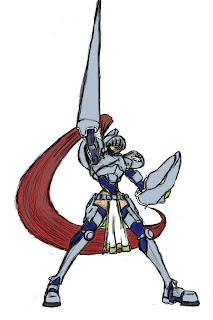 Hope you all like the idea, and more news will arrive in the future.
Enjoy the Night,
~Søda
Posted by Søda Meløn at 8:37 PM No comments:

I wanna hear you SCREAM 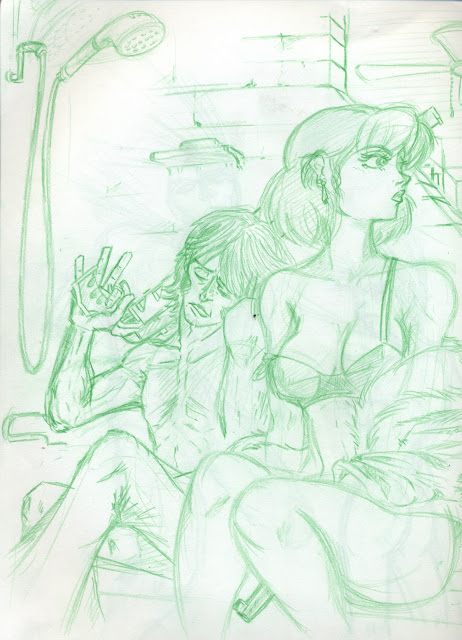 Production on Scream Shooter has been postponed (Currently TBA) in light of PASMO RADIO's push towards production. However, The Pre-Production Concept Art Collection, Shrieks of Santa Arséne, is still going to be finished around the same time-frame as "PASMO RADIO - The Guerilla Concert", which is slotted for JULY 4th, 2011 (See what I did there?) Other news regarding Scream Shooter will be announced periodically until then, as well as pre-inks and such like this one.
Yours,
~Søda Meløn
Posted by Søda Meløn at 5:23 PM No comments:

So it seems my roommate Q has his scanner set up and ready to use after all!

This is quite good news, because now I can post snippets of my work for you all to view, and it will be even easier when my internet connection is established. I've got some personal things well in the woodworks, 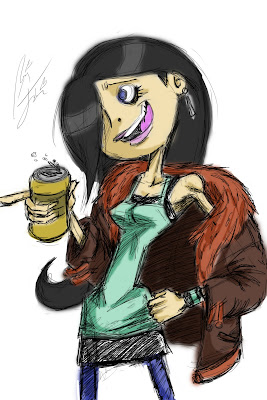 so keep an eye out.

I'm composing simple little diddy I put together to help grasp the feel of a current project, PASMO Radio,  and it's musical theme. Very much in the creation stages still, with filler guitar parts until my guitar player sends me his part.

PASMO Radio Trial Clip #2
Feel free to let me know what you think so far.